Before it was mentioned a couple of days ago on the news, there was little published about a mass grave “Tomasica”. All who saw it could see what happened there. We need to ask: where did humanity disappear to? Is that principle which divides us from animals just a word on paper?

This article is devoted to the nearly 1200 people, who had lives, families and dreams. And in an instance, they were killed in 1992 in front of their children, parents, sisters and brothers. They were burried in the biggest mass grave in Europe after World War II.

We only heard about Srebrenica until this time. We probably remember that just for a few days in July. But the problem is not just that. What are we doing? What have we changed about this? Nothing. All of Europe witnessed this violence in 1990’s and no one did anything against that. All world watched the terrible events in the middle of Europe like a movie.

This was something that occurred in front of the United Nations and European “modern” countries. Yes, everything that happened did so in front of “human rights defenders”. People were killed. Moreover, they lived a genocide. No one can accept what happened there. And no one one took responsibility.

Tomasica is a place in Prijedor city in the Serb Entity of Bosnia-Herzegovina. It started as a campaign in Prijedor from May 1992. Local war goverment gave the order “that all who are not Serb, need to wear white band on the arm” and for houses to be mark marked “with white towels”. An ethnic cleaning against Bosniaks and Croatians followed and it occured village by village. Killing all the men in one Bosnian village took just two or three hours. Whoever survived this madness of killing was transfered to one of three concentration camps: Omarska, Keratern, Trnopolje. Private camps were created for woman in Prijedor, where they were raped and humiliated.

Thousands of people were killed in the Omarska, Keratern, Trnopolje camps and were thrown in hundreds of pits. In those three camps for three years, between six and seven thousand people were passed. Less than half survived the torture and beatings. Those who survived were from Prijedor. Tomasica was different. That pit was dug a half of a year before the killing. It was their intentions that hid the crimes.

People were killed one by one. After they were killed, their bodies were moved by trucks under the sun of day. Some corpses were made piece to piece by Serbian Chetniks. And this didn’t just happen in Prijedor. Chetniks moved thousands of bodies to the pits with trucks. Prijedor became another cemetery for innocent people near Srebrenica. Sources speculate that there is have 3500 more bodies in mass graves.

We are shaking today like ice front of reality. Think to a place, where there was a mass grave meters nearby and no one said a single word about it. Today we are seeing a 2 year old girl there who should be 21 today.

Tomasica was first opened in September 1992. Local villages wanted to remove parts of Tomasica, because dead bodies were stink to them. Local governments removed 300’s more bodies and move them to Ljubija, crushed all of the bodies and buried them in the mountains (Jakarina Kosa, exhumed 370 bodies).

After, more graves were opened in 2004, 2006 and as recently as this year. Bosnian teams have uncovered 430 bodies until now and they expect to find more than 400 bodies in the spring. Tomasica is once again closed to preserve its human remains.

Moreover, the Tomasica mass grave is just one. An additional 150 mass grave were discovered in Prijedor. Teams are searching for others to assemble the pieces. These places didn’t see just massacres, they lived pain with all reality. Thousands of woman were raped by Chetniks. They didn’t look at their ages, they just killed; women who were pregnants, babies, children, women and men.

Meanwhile mass graves didn’t just hold people, dead animals (dogs) were found with the bodies in Tomasica. They were buried with their owners.

Bodies and their pieces are still waiting for DNA tests in Sejkovaca. All these innocent people were wearing on the day, they were killed were everyday items like pants, slippers, in some cases shoes. They died in front of their houses, maybe waking up only to be killed after showing. 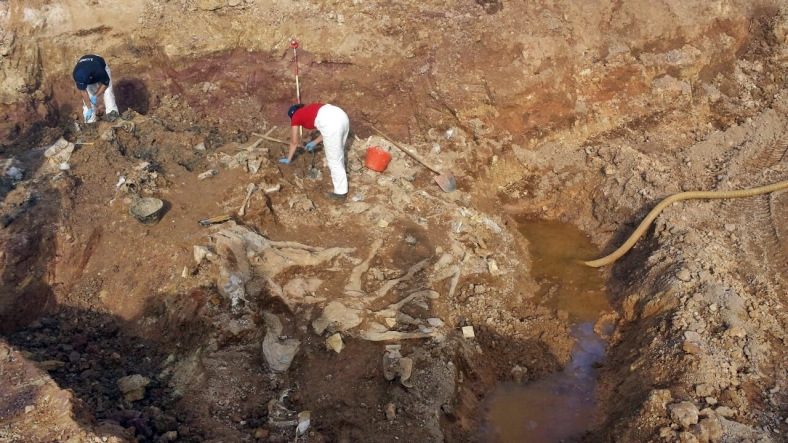 A journalist said from Bosnia-Herzegovina;

“Tomasica is can see from centre of Prijedor. Families searching their family persons. Now, they without voice screaming. Because this not a ‘genocide’ for someones and this word is forbidden in Prijedor.”

What can we say at the end, when the end is so far away? Exhumation and investigation will not be finished untill 2015. In Prijedor, three sides exist now: innocent victims, victims which forget the victims and those hiding the truth with their silence.

2 thoughts on “A word called “humanity””