Armenian claim’s so-called anniversary, April 24. That date had another meaning this year, because it was commemorated as 100th year for 1915 events. I wrote about these events before, as three parts, those are Gallipoli War, Armenians in Ottoman Empire and Genocide against Turks. Turkey’s steps always have been so clear about these events, we have been calling to Armenia for peace. But our calls have always been welcomed with rough an attitude. This year has happened the same, Turkey gave to world a big peace message in Canakkale.

However, I saw a photo from Armenian capital Yerevan on April 24 and history revived on my mind with this photo. And I decided to write about this picture on “the 151st Anniversary of Circassian Exile and Genocide“. Serbian President Tomislav Nikolic, Russian President Vladimir Putin, Armenian President’s wife Rita Sargsyan and French President Francois Hollande were side by side on that picture.

This picture can be meaningless for many people, “if they don’t know about history”. But it’s not meaningless for us and I must warn from the beginning that, “realities can hurt”.

DID YOU HEAR ABOUT SREBRENICA OR PRIJEDOR?

Srebrenica is a town in the Serb entity of Bosnia-Herzegovina but we call it the “Capital of Pain“. Srebrenica was one of the safety zones declared by the “United Nations”. It was where the ethnic cleansing campaign was done by the “Serbs” which happened in 1992. Srebrenica had a population of 24,000 before the war but with the addition of refugees its population rise to 60,000 during clashes. Hunger and disease reached the town but worse happened when “Ratko Mladic” (calling as well “Serbian Butcher”) came to Srebrenica.

Mladic’s cruelty started in short time, thousands of the innocent Bosniacs were killed within 5 days in Srebrenica. Also their persecution didn’t end there, their dead bodies were cut into pieces by the soldiers until only their bones remained. Thousands of pits were dug for the bones and body pieces to be burnt and buried. Thousands of women witnessed the death of their husbands or children. Mladic had plans for them as well, thousands of them were raped by his soldiers and hundreds were killed like their husbands. Hundreds killed themselves while the others learned to live with it.

And Prijedor, there is also a town in the Serb Entity of Bosnia-Herzegovina. There has started a campaign, too in connection with Srebrenica. Local war goverment gave the order “that all who are not Serb, need to wear white arm bands” and for houses to be marked “with white towels”. An ethnic cleaning against Bosniacs and Croatians followed and it occured village by village. Killing all the men in one Bosnian village took just two or three hours. Private camps were created for women in Prijedor, where they were raped and humiliated.

Thousands of people slain only in Srebrenica and Prijedor, also still smelling blood on every part of Bosnia-Herzegovina. There are never known the real numbers, mothers are still crying in Bosnia-Herzegovina after years, everyday new graves are being explored on every part of Bosnia and anything hasn’t been forgotten on that soils. By the way, what happened on these soils, those all happened in front of the “United Nations” and their name has changed there, it is called by people “United Nothing”.

Mr. Nikolic, do you think that if you join to ceremonies in Yerevan, that will cover your “sins” in Bosnia-Herzegovina?

DID ANYONE SPEAK ABOUT WHAT HAPPENED IF YOU HAVE NOT BEEN “RUSSIAN”?

“May 21” can be only a day for many people but there it has a part in history. Did you ever hear about “Circassians”? I am not sure. This word is not in Mr. Putin’s dictionary but there it has hundreds of thousands of people who have suffered slain by Russian Empire, they were who call as “Circassian”. Near Circassians, also “Abkhazians”, “Tatars” and “Meskhetian Turks” were there. Of course not only those people, there have also been different nations, too who have lived under “Soviet” cruelty.

“Circassia” or “Adygea”, there is Circassians homeland on Black Sea’s North-East in Caucasia. Russian Empire’s destructive force was besieged to Circassians. They were one of a nation who are not give up from their honor and didn’t genuflect in front of Russians. So, came to 1860’s and Russian forces started an ethnic cleansing in Adygea, not only for Circassians, Abkhazians also suffered on this region. History’s most big massacres found that peoples with big a savagery. Cruelty didn’t end for who has survived from massacres, hundreds of thousands of people were exiled from their homelands and more than half million people were killed by Russian Empire during this period.

Georgian origin historian Simon Janashia is saying about Circassian Genocide: “For seven years human bones were spread over the seashore. Ravens were making nests from men’s beard and women’s hair, for seven years the Sea was drifting to the shore the human skulls as a watermelon. I do not wish the enemy to see what I have seen.”

Soviets continued what couldn’t be finished by Russian Empire and 1940’s opened a new page about cruelty in Russian history. Russian expansionism was grown with blood in Caucasia and Central Asian nations were besieged by Soviets. History saw one of the wildest leader in the world, that was called “Josef Stalin”. Who didn’t get genuflect, they were slained one by one; Tatars, Chechens, Kazakhs, Meskhetian Turks and more… Someone can say, “Stalin was a hero” or they can talk about “how beautiful communism is ” but this will not change anything, exile continued for years under massacres’ shadow and anyone didn’t talk about this. Why?

UKRAINE AND GEORGIA UNDER OCCUPATION

Of course there didn’t finish anything, Russian traditions and cruelty still continue today around the world. We have watched how Russia occupied Georgia’s soils “Abkhazia” and “South Ossetia”. We saw how they have occupied Ukraine’s “Crimea” and a new page opened for “Crimean Tatars”. New eras old Russians, exile Tatars one more time in the “modern” Russia. People are dying on the streets in “Donetsk” and “Luhanks” under Russian tanks. Maybe some people can say to me “but West”? I will not protect European Union and United States here, they are not “clean spoons which have quit from milk”. We have occupations in Caucasia and Eastern Europe and we are only watching how “innocent” nations are being exiled from their homes.

Eastern European countries’ people are uneasy since months because of threats. Who cares about United State’s “shows” with tanks on Russian borders? What can make United States or European Union for that countries if Russia makes a move? Everyone knows that anyone will not stop Russia on situations like this and we will see more Ukraine, more Georgia with “separatist Russian” in those countries. Except Eastern Europe and Caucasia, if we must look to Middle East, who will pay the price for half million dead “Syrian”? What can be all of this named except “fascism”?

WHO IS TALKING ABOUT OCCUPATION IN AZERBAIJAN?

I didn’t hear anything about Azerbaijanians except “curses” from Armenian President Serzh Sargsyan. Also, who are talking about “human rights” around the world, why are they afraid to talk about Karabakh? Whoever puts blames to Turkey with “genocides”, why are they ignoring how this so-called president entered Khojaly with his soldiers in February 25, 1992? We didn’t forget, how this terrorists made “ethnic cleansing” in Azerbaijani villages in Karabakh.

Near that if I must go more back, did anyone pay price for “Black January“? It’s a massacre which happened on the Baku streets in January 20, 1990. “Nobel Peace Prize” winner “Mikhail Gorbachev’s” tanks were there and killed more than 130 Azerbaijanian. So, Russian “tradition” continued and Armenia learned many things from them.

France’s colonist lovedid never end in history, Algeria was one of them. France and their assimilation politics hits Algeria after World War I, near this French settlers rights born a big inequality against Algerians. Started an independence fight in short time but World War II slowed this fight. France wanted Algerians to be with them on war, against this they promised to give to Algerians their “freedom” but that stayed only a “dream”, as well. Who had gone on the streets, in order to celebrate “victory” and “freedom”, they had met with French bombs in Setif and Guelma. More than 40.000 Muslim Algerian slain on this attack by French powers. 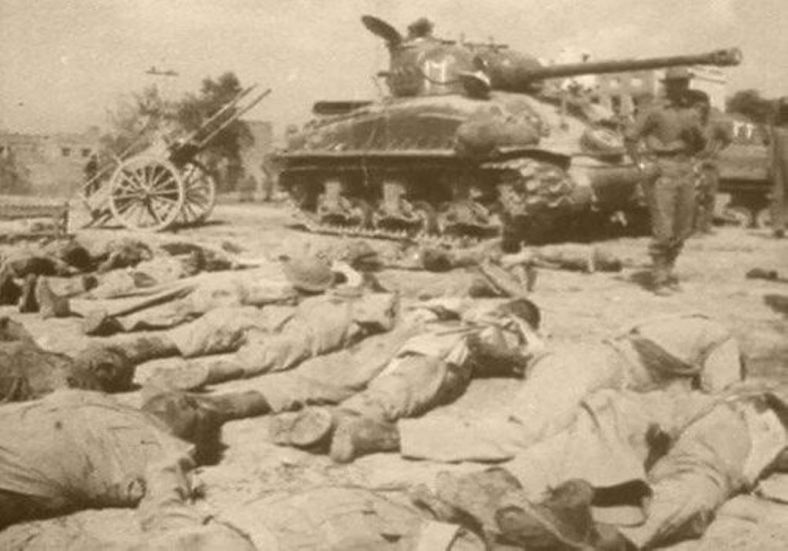 Setif and Guelma massacres born a liberation organization in Algeria and started a big rebellion against France in October 31, 1954. France answered with arrests first, then sent 500.000 soldiers to Algeria, so as to stop the rebellion. History saw terrible “torture” technics on this period, near this thousands of people were killed extrajudicially. But what French made in Algeria, that didn’t stop rebellion and it was growing more and more. And independence struggle resulted with Algerian people’s victory in 1962. French claim, they haven’t made a genocide in Algeria but documents are showing more than one million Algerians were slained on this period by France on Algerian soils.

Of course France’s rap sheet is really long, as a colonist, there another place for them is Rwanda with co-worker Belgium. Rwanda is a country in the middle of Africa, the population there was %90 Hutu, %9 Tutsi and %1 Pygmy. Belgium’s politics have made exclusive Tutsis in the beginning and that politics born a hate between Hutus and Tutsis, two tribes leaved from each others so much. After World War II, Rwanda has won its independence and a Hutu leader came to head. Hutu government started an exile for Tutsis, most of them became refugees to neighbor countries.

Also draw attention the armament between Hutus, they were prepared for massacres. And Rwandan president’s helicopter crash has been the first spark in April 6, 1994. Radios called for an ethnic cleansing against Tutsis and radical Hutus started a “hunt” with cleavers. More than 600.000 people were killed in a few months on this period, against this Tutsis started a struggle against this savagery. There France took place, until that minute at which has stayed quiet genocide in Rwanda, they started giving military aid to Hutu government. Tutsis near with soft Hutus, death tolls passed 800.000 in short time. What did Belgium for making their work easier, this turned into a savagery in Rwanda with France’s support.

After all this, Mr. Hollande do you think Yerevan will cover France’s sins in Africa?